Chillagoe – Definitely Worth A Visit

On another magnificent day in November we drove the 2 hour journey from Atherton to Chillagoe.

Having travelled there with my family at 9 years of age, I had vague memories of  dragging a 30ft caravan over a hellishly corrugated, interminably long, dusty dirt track to an unexciting town in the middle of nowhere. My parents who were fossicking & history enthusiasts had dragged us kids all over this area in the early 70’s so I was interested to see whether my memories remained true today. 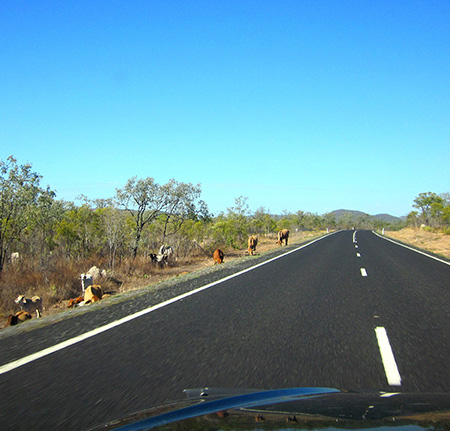 As Queenslanders, we are used to the usual disgraceful bumpy, potholed state of our major roads and even worse condition of lesser roads anywhere outside the South-East corner of the state. Today, we were pleasantly surprised!

The majority of the road from Mareeba is sealed, wide, and scenic affording beautiful views of the landscape and approaching hills where Chillagoe is located. On the other side of Almaden, is around 16 kilometres of unsealed road which is in good repair today. (The wet season changes road conditions so check if travelling in those months). The major danger to high-speed travel are the many cows that meander freely, standing by and on the road and the kangaroos that forage along the verges randomly hopping across the road at any time of the day.

Almaden, a dusty group of houses and a pub located miles from anywhere features bare earth, free-roaming cattle with the accompanying dung deposits and makes you wonder why anyone lives out here. It reminds you how easy city-dwellers have it! Red-earth colours are starting to kick in. 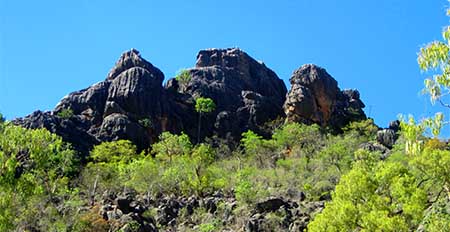 As we approach Chillagoe, the remnant rocky outcroppings of ancient coral reefs begin to emerge from the bushland around us. The area is one of the most diverse geologically anywhere in the world containing fossilised reefs, extensive limestone caves, famed Chillagoe marble, and a variety of rich mineral deposits including copper, zinc, silver and gold that were the origination of settlement in this remote area.

Marble mines appear right alongside the road. We are fascinated by this and stop to take a closer look: massive 22 tonne blocks of some of the world’s best marble in a variety of colours are simply carved and extracted from shallow pits in the ground. I have seen this marble in houses and foyers in some of the best hotels in Queensland and when polished it is magnificent!

Driving into Chillagoe, we are greeted by a neat, green spacious and well laid out town. We want to beat the heat of the day so first stop is the Chillagoe Hub information centre to purchase tickets. We buy tickets to the Donna Cave tour at 9am and head out quickly as the tour starts in 20 minutes! 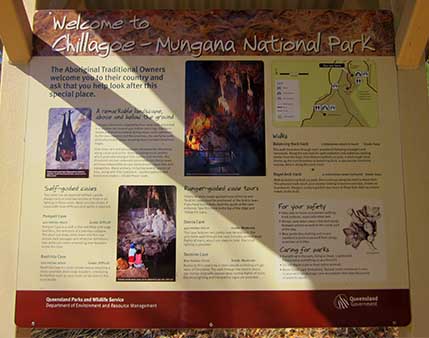 Exchanging thongs for joggers in the carpark we take the bush track and climb to the entrance of the cave. Ranger Dave meets us here today and we find we are the only ones booked on the tour this morning. Bonus. Dave turns out to be a good Aussie bloke who is passionate about his work as a ranger and tour guide and relocated his family to the township of Chillagoe 2 years ago so his kids could grow up living the country life away from the rat race. Our kind of guy! 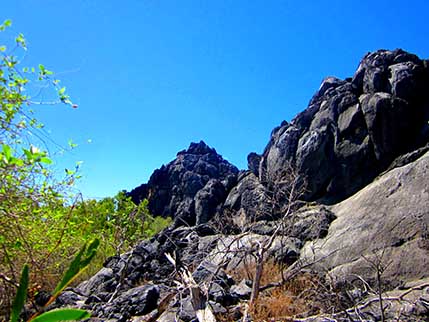 We are told that there are possibly over 600 caves throughout the Chillagoe-Mungana National Park area – 3 of them offering ranger guided tours. It is believed the area began forming around 400 million years ago when the area was covered by a shallow inland sea that stretched over much of inland Australia. Over the millennia, the sea disappeared and the fossilised coral reefs and rock formed by calcareous mud was lifted, tilted and eroded creating the system of exposed rocky outcrops and limestone caves. Water running through created the limestone caverns and features of the caves. Dave asks us not to touch the limestone formations as the acid from our hands will turn the limestone black and damage the formations. Hands in pockets boys! 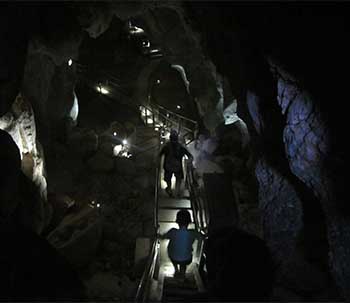 We descend via a set of steep stairs suspended over fallen boulders into the coolness of a huge cavern. We pass through chamber after chamber adorned with stalagmites, stalactites and flowstones. Nature’s cathedral! The tour lasts about an hour and Dave is a wealth of cave knowledge and allows us ample time to marvel at and photograph the many magnificent formations in the cave. The patience and artistry of the natural world is amazing!

There are a lot of stairs but they and the extensive walkways are well built chequerplate steel and timber and easy to traverse. Lighting is via low voltage LED strings and spotlights which are individually controlled and switched off after we pass each area so as not to interfere with the habits of the small bats which inhabit the caves. We hear and feel a couple whiz by us as we move from area to area. The power cables and fixtures are so well hidden that the lighting looks diffuse and natural. A lot of hard work has gone into making these and Dave informs us that the rangers do most of the installation work themselves in the quiet season – impressive! 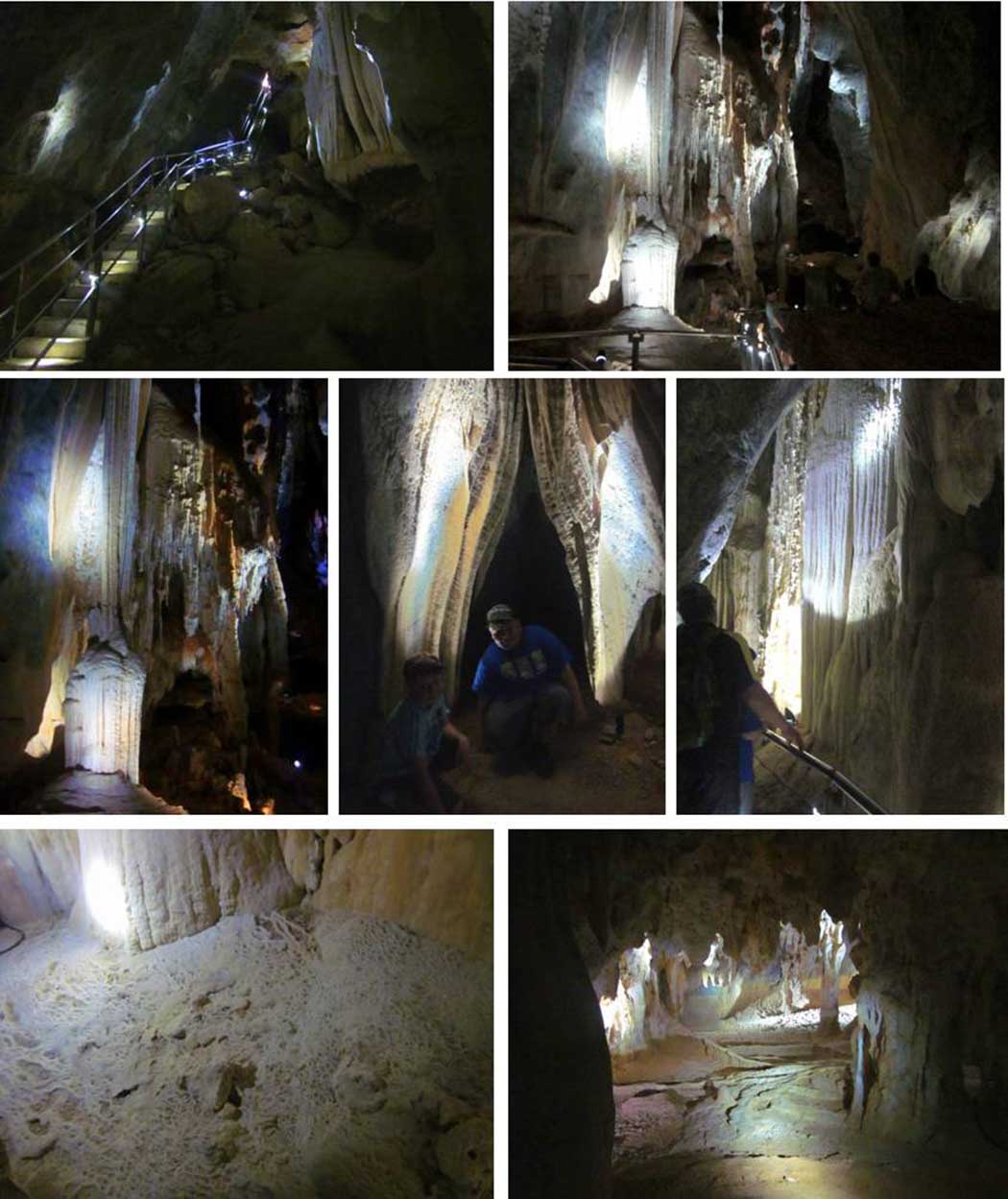 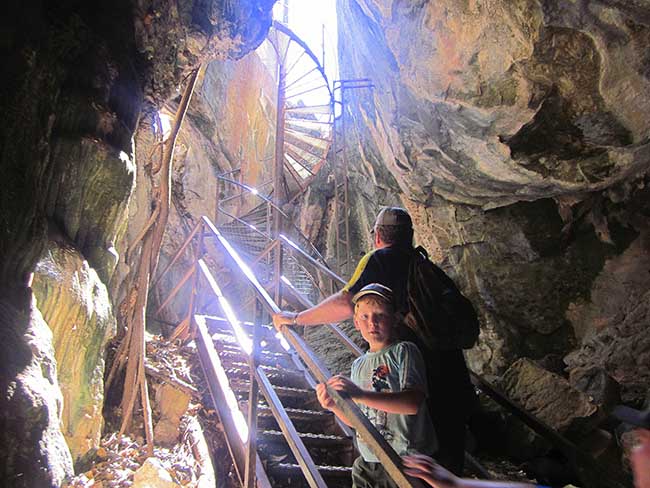 All too soon our caving experience comes to and end. We are greeted by an unexpected sight – a spiral staircase that ascends us from the ethereal lighting of the cave to the bright light of the day outside.

I feel a pang of sadness at having to leave this wonderworld and want to turn around and do it all again! 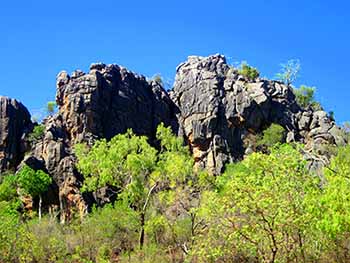 Farewell Ranger Dave and thanks for the great tour!

The boys are enthusiastic about caving now, so we decide to head out to the Archways caves in the Mungana section of the National Park. Along the way, the massive black limestone outcroppings line the road and we wonder how many hidden caves there are in them. 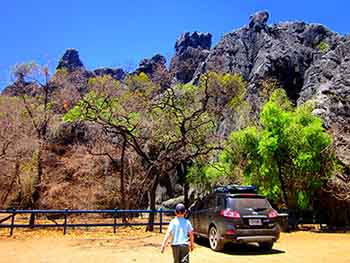 The archways are a section of caves and passageways formed from big boulders of rock that have been heaved around by the earth interspersed by huge fossilised coral reef and bommies.

They take us into what feels like a secret world complete with its own rainforest ‘garden’ which disappointingly was not captured well on the photographs.

Some of the coral rocks were so polished with their surface like glass or china it would be impossible to find traction if wet whilst others were sharp and pitted. The colours and variances in rock & texture were beautiful.

The greenness of the young rainforest trees whose roots clung to the thin layer of soil for support and the delicateness of their leaves contrasted with the ancientness of their surrounds. 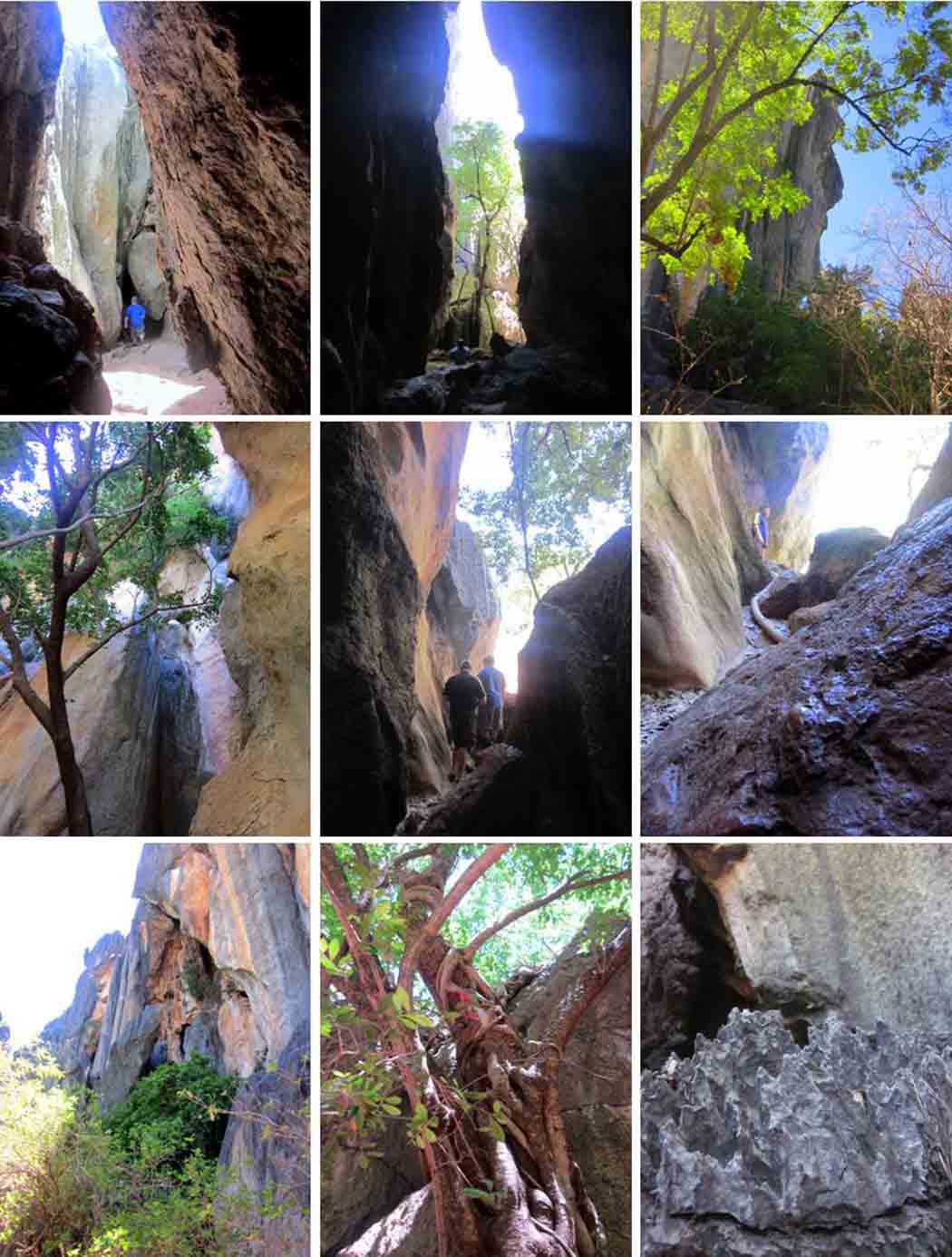 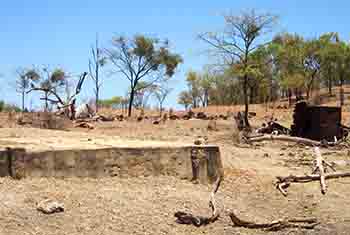 On the way back to Chillagoe, we drove into the remnant site of the ‘township’ of Mungana which was settled originally to service a local mine and build a smelter and railway. Photos depict the township in the late 1800’s which interestingly used camels to transport goods and ore before the railways were built but today not much remains. Some old concrete, corrugated iron and water tanks strewn around the harsh landscape and anthills are all that is left. Another reminder of the impermanence of man and the mightiness of nature.

We head back to town for lunch at the Post Office Hotel. Centrally located the pub is a cool oasis on a hot day. Lunch was delicious  – real Aussie burgers and fish & chips – reasonably priced and served with some country friendliness. We sat in the shaded beer garden enjoying a cooling drink and ‘though around 2-ish were joined by another group of late eaters – a tour company come from Cairns for the day to visit the caves. 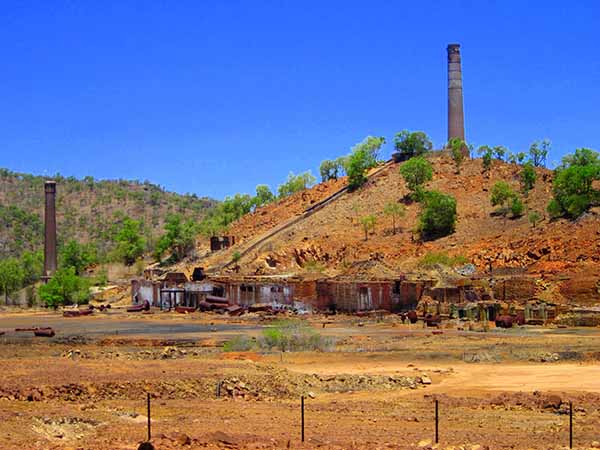 Recharged by lunch we headed the short distance out to the famous Chillagoe Smelters. Due to toxicity and the instability of the remaining buildings, you cannot access the immediate area of the smelters.

The smelter site and a wealth of information about the history of the area are viewed from the overlooking hill which you can drive to and then access by a short walk. 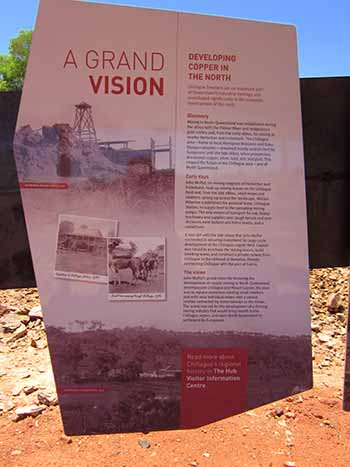 Many boards along the walk contain information and photographs depicting the fascinating evolution of the town and smelters in the late 1800’s.

Resulting from the vision of one man – John Moffat  – who bought mining leases throughout the area and built the smelter and a private railway to service the mines. By 1908 Chillagoe boasted ten hotels and a population of over 1500.

Chillagoe’s history is an engrossing tale of grand design, determination, hard yakka, intrigue and even scandal which brought down two former Queensland premiers in 1929. 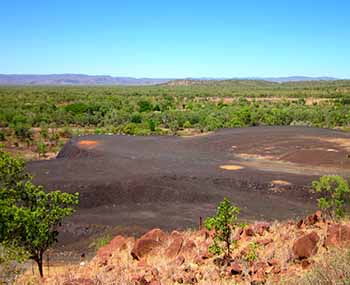 Interestingly the smelters which produced tens of thousands of  tonnes of lead and copper, over 6 million ounces of silver and 175,000 ounces of gold between 1901 and their closure at the start of the Second World War, never made a profit in any year of operation.

They did however generate enterprise, infrastructure and a wealth of opportunity that would not otherwise have come to this remote area.

Its getting late in the day so we head back into Chillagoe for a visit to the information centre – kind of the wrong way round to do it!

The neat and green Chillagoe Hub contains a wide variety of photos and information on the town, mines and smelters as well as information on the diverse geology of the area and its natural inhabitants. Outside the Hub stand examples of the local Chillagoe marble in its natural form. Definitely worth a visit and probably allow at least an hour to do so. 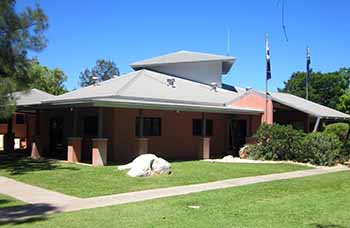 Nearby on the side of the road an open concrete and brick structure caught our interest. Investigation showed it to be the bank vault from the Bank Of Australasia. Built in 1909, the simple wooden bank stood around this vault until 1929 when the building was relocated to ChartersTowers. 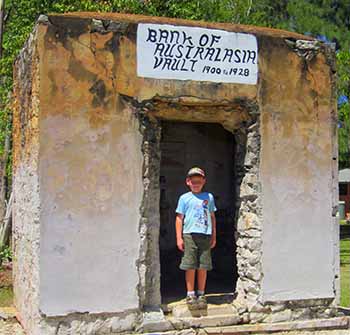 As it’s now close to 5pm, we have to leave as we still have a 2 hour drive back to Atherton. If we do this trip again, we will definitely stay over night and do at least 2, maybe three of the guided cave tours and spend more time investigating this interesting town. Chillagoe offers plenty to do for a couple of days at least and that’s without too much relaxing.

There is a caravan park with a pool, camping at the showgrounds and several accommodation houses located in Chillagoe. The Chillagoe Guest House located in the centre of town is built in the renovated old Chillagoe Post office – built 1901 and provides travellers with a home-away-from-home accommodation experience complete with continental breakfast. The Chillagoe eco lodge and observatory offer pet-friendly accommodation, camping and have a restaurant. The night observatory is a novel addition to any overnight stay and would definitely be on our list of things to do.

Chillagoe is a fascinating part of historical and current day Australia and is definitely worth the time and effort to visit here. Highly recommended.

Getting There: Chillagoe is around 2 hours drive from Mareeba or Atherton and just under 3 hours from Cairns without stopping, The road is scenic, mainly sealed with only about 30 kilometres of gravel which during our trip was well graded and easily traversed by any vehicle. In the wet season it would be wise to check local weather and road conditions prior to travelling. Bus tours are available from both Cairns & Mareeba.

The trip from Mount Surprise through back country roads takes around 3-4 hours with a fair bit if dirt road. For journeyers on the Savannahlander Train we would highly recommend the option of visiting the caves and staying overnight in Chillagoe as a memorable addition to your trip.

Oh, and don’t forget a torch!

For information on the caves tours and pricing – visit the National Parks Website: http://www.nprsr.qld.gov.au/parks/chillagoe-caves/index.html

Chillagoe-Mungana Map can be found here