North Queensland, and indeed Australia is full of magnificent places to visit and live. Mission beach is one of those fabulous places that stays in your memory long after you have departed. The whole of this coastline from BingilBay in the north to South Mission beach is fabulous – miles and miles of rainforest-trimmed sandy beach.

Beachfront living at its best.

Travelling south, we knew we had to spend yet another couple of days in magical Mission. Well supported by a huge variety of accommodation types – from beachfront camping spots, holiday houses and apartments to up-market resorts, supermarkets, café’s, bars and restaurants, there is something for everyone’s taste and budget.

Being November, we were lucky to score a large drive-through site

in the council operated caravan park right on the foreshore in MissionBeach itself with no reservation. Probably not the best maintained caravan park on the face of the planet, but what it lacks in amenities it makes up for with the three P’s of real estate – Position, Position, Position. Less than 50 metres from the beach for around $10 per night, well behaved dogs welcome. What a bargain!

The next morning I took Jazz down to the beach for an early morning run. Jazzie loves the beach.

The day was super-magnificent. Almost glassed out with warm crystal clear water. And hardly another soul on the beach.

Dunk Island and its family of islands floated invitingly in the distance. The once thriving resort onDunk still sits in partial 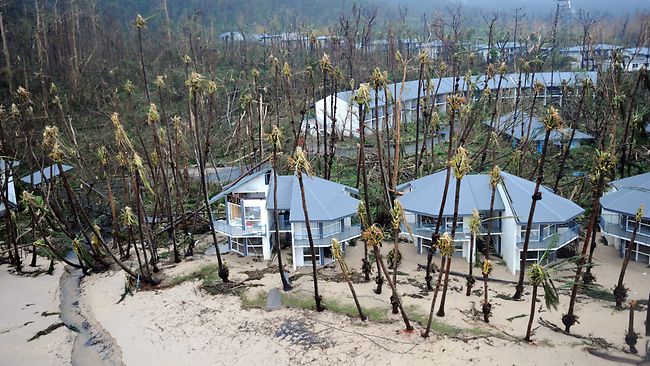 ruin and unopened after its thrashing from Cyclone Yasi in 2011.

Recently the cleanup of the public areas of the island was completed and the replacement jetty reopened to enable commercial day-access to the island. Further down the coast, the exclusive Bedarra Island, also smashed by the 300 plus kilometre/hr winds, reopened a couple of months before our arrival. Redesigned as an eco-friendly resort, it has been reported to be one of the best new hotels of the world.

Wandering along the beachfront at Mission Beach, you can see the remains of the devastation that hit the area. Toppled trees still lie on the dunes, the occasional beachfront property still in some state of disrepair and a few closed or vacant businesses. This hasn’t affected the natural beauty of the area however and the famed beaches remain magnificent. 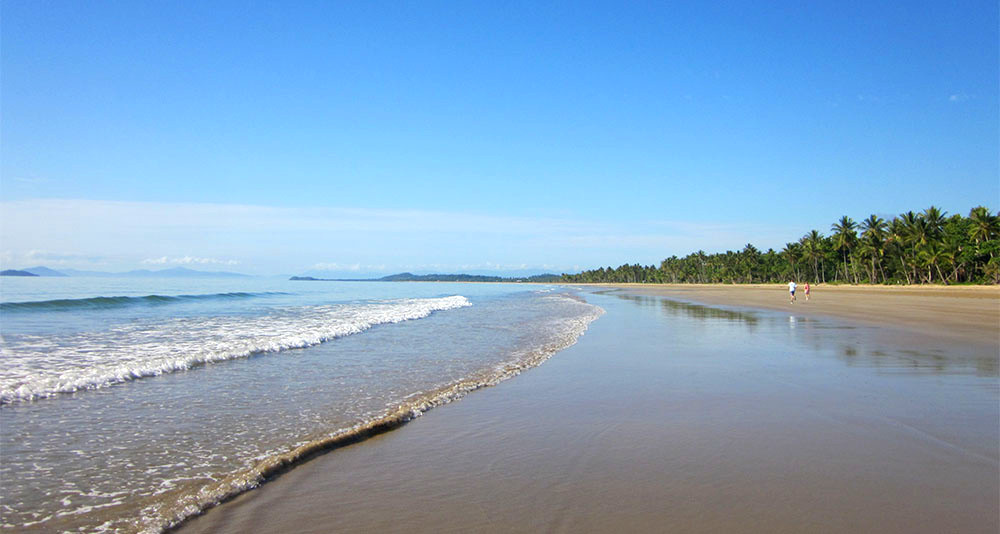 After travelling through inland Queensland for over a month, the boys were itching to do some fishing. As luck would have it, our neighbours at the caravan park informed us that the new Clump Point Jetty, also trashed by Yasi, had been rebuilt and opened that very morning. Apparently the mackerel were on the bite. Floating a pilly was the way to go. Yum Yum – fish for tea!

After a quick stop for some traces, balloons and bait, we drove north through lovely Bingil Bay to the new Jetty. As it turns out, a very nice concrete jetty that takes you far out into the deep water. There were lots of people already there but luckily today, there were plenty of fish to go round and lots of action. 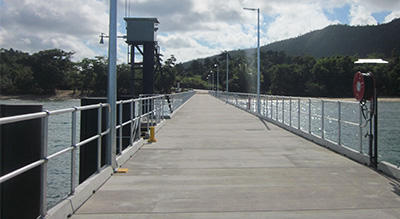 We chatted to some other people on the jetty who were also staying in the park and they informed us they had hooked the biggest fish of all yesterday – a 10ft tiger shark who lives around the Jetty. She had got him to the surface for a look!. We warned the boys – stay away from the edge!!

Dean hooked the first fish of the day – the challenge was getting it out of the water and up onto the jetty without it wiggling off the line. Carter followed suit with another beauty.

Delicious fresh mackerel on the barbie for dinner – is there anything better? The boys were so excited they begged us to go back in the morning. 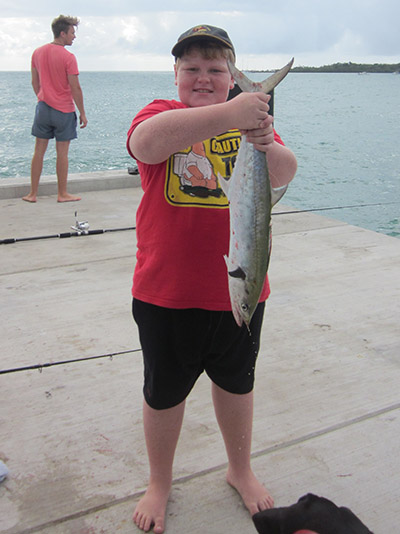 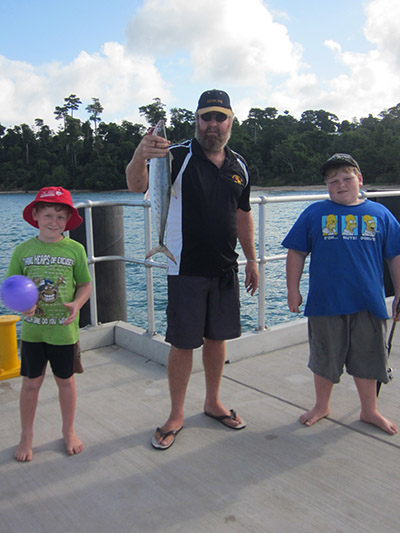 Arriving about 5.30am, we had the wharf to ourselves. We each had great fun hooking a decent mackerel. My Spanish was a nose too short and so lived to fight another day. 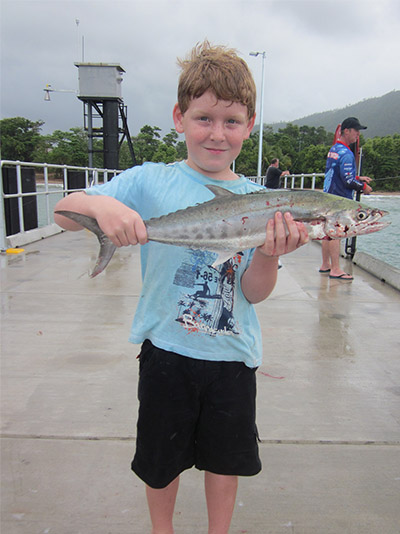 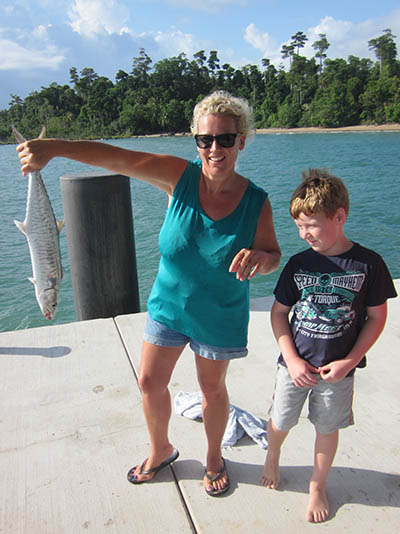 Then the shark moved in. Deciding he wanted pilchard for brekky, he swallowed our bait, gang hook and all and then slowly and steadily turned and headed out to sea, towing the line off the reel until we snapped him off. He did this time and time again. I could picture him down there like Bruce from the movie Nemo, smiling with a mouth full of jewellery. At least while one of us was entertaining the shark, the rest of us had a chance at catching a mackerel.

Finally, when he had just about cleaned us out of tackle, we decided we had enough fish for a meal or two. Donating the rest of our bait to some overseas tourists who had just arrived, we departed leaving them to have a bit of fun feeding the shark.

So long magical MissionBeach – and thanks for all the fish! 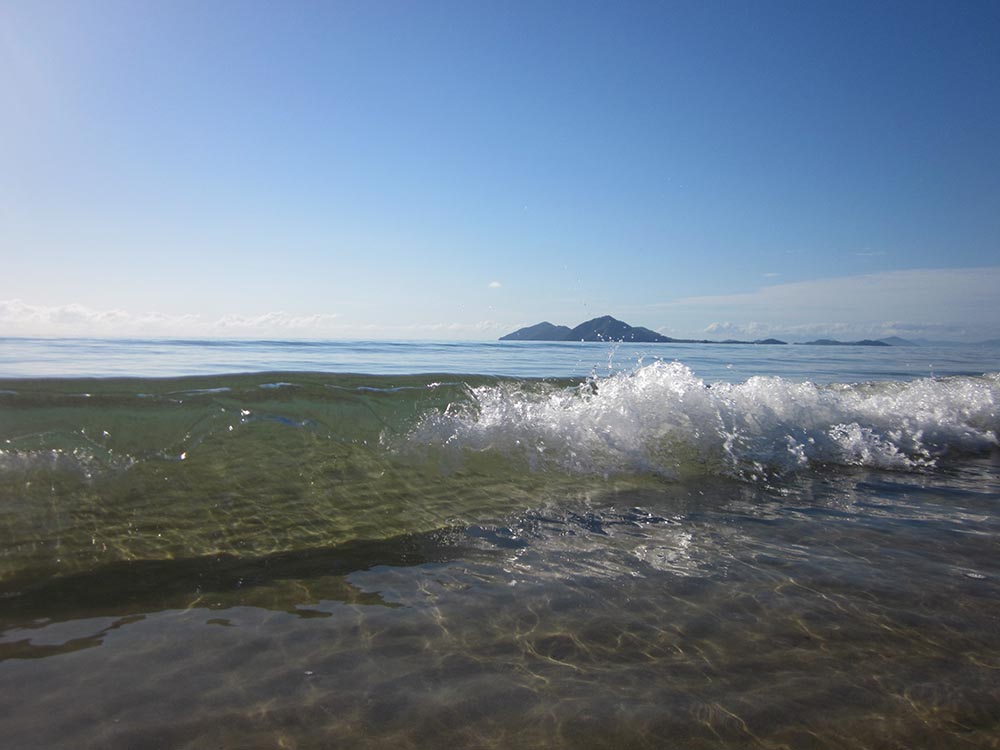